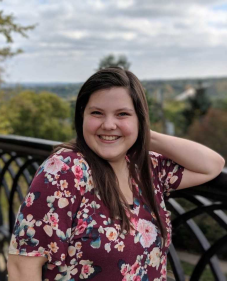 My name is Abby, and I’m an aspiring YA author who writes and dreams stories. I’m a twenty-something, sort-of adult. What that means is I’m a struggling blob made up of:

If you can relate to the above, you know a little bit of what I feel like in a society where we had to make the world “adulting” to make ourselves feel better about how much we suck at being adults.

Before I became the awkward adult I am today, I was a kid. I’m the middle child of four sisters, and I was born in Texas, grew up in Missouri, and finally migrated up to Minnesota where the winters freeze your toes and the summers scorch your brows.

I majored in English in the Twin Cities, and now I’m going for my MA in Creative Writing and Publishing. On the side, I work a crazy retail job. In my time at college, I’ve discovered many passions. Namely, pandas and writing for others.

My spirit animal is a panda. I say this because pandas are mostly useless—except when they’re not. They laze about and eat all day. They probably contemplate their existence, too. And then sometimes they do something useful, like eat bamboo to regulate the environment. But mostly they meander across forests on stub legs and make strange noises when excited. I often look at panda GIFs and think, I understand you, large and uncoordinated beast.

Obviously, writing is why I’m here. In my younger years, I handwrote cringe-worthy stories on notebook paper about kids who saved the world on flying ponies. Don’t ask me why.

When we adopted my sister in Missouri, she inspired me to write stories in my early teens. I started participating in NaNoWriMo in 2013 and continued to refine my writing. I joined Wattpad in 2014 and took a leap of faith by posting my YA fantasy Seize the Day on the site under my pen name Katie Spektor (which I’ve now changed to my real name, as you can see).

It turned out okay because in that same year Seize the Day won a 2014 Wattys Instant Addiction Award (Wattys is much like the Grammys, but for Wattpad). I was thrilled because the award gave me publicity, but it also helped my writing reach so many people. I went on to post the next books, Chains of Fate and Path to Destiny. As of today, the series has a combined total of 3.1 million reads on Wattpad.

My love of reaching people, especially young adults, propelled me to major in English in college. Since college, my writing has improved immensely by way of peer review hellfire and constructive, hardcore feedback from teachers. Sometimes all this criticism made me despise writing, but I always remembered my goal: to be a YA author of fiction that gives readers hope in a world that is both broken and beautiful.

Several of my works, such as my YA fantasy trilogy Seize the Day, can be found on Wattpad. I’m also a writer on Medium, where you can view posts, poetry, and more that aren’t on this blog!

If you have a business inquiry, questions/concerns, or would simply like to contact me, feel free to reach out to me!

I'm Abby. I'm a twenty-something aspiring YA author trying to live life to the fullest. I blog about the writing life and adulting, sharing my whimsical observations of the world around me.